The Coolness and the Love! 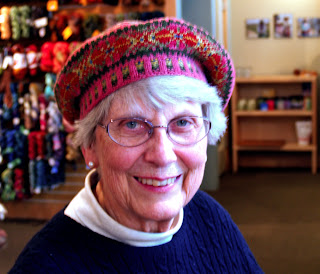 Okay today’s blog theme is the cool things that be.

A number 1 I promised some people the really cool pumpkin soup recipe.

It’s cool because it’s French and it’s easy. Easy like a Sunday Morning.
How do I know it’s French? Well, by the ridiculous amount of cream used. The ingredients are as follows:

The other cool thing about this recipe is it’s adaptability. I’ve used stock when I’ve been low on cream, added vegetables or meat to change it up a bit, included various fresh herbs or spices, and the reserved toasted seeds as garnish. Bon appétit! 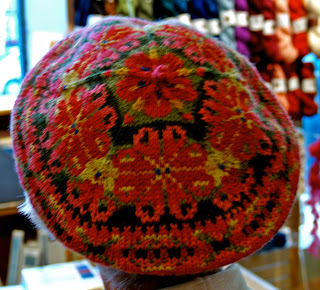 I know! Isn’t it cute? The fact that I find it cute says something. I don’t do Faire Isle and the Beast doesn’t do berets. But still… charming. Made from the Norwegian loveliness called Hifa2 and modeled by the charming Marilyn Deering (we love her so much we just want to fix tea for her all the time). The mags are pulling out all the stops with the approaching holiday and I suppose I will be stashing away lots of ideas for creatively dry times.

I went to this place with “Dan” (aka Don, fearless leader’s DH) to buy some goodies for the holiday window.

It’s a surprise but if you investigate further, you will discover the secret. I also should mention with this effort I hope people know that we love our customers in KP land.
No, really. The love we feel for our peeps is illegal in 32 states.
Feel it. Roll around in the love like a sweaty fat wrestler. Do you feel the love? Do you feel it? Do you?

The love brings me to further coolness:

THE HARLOT EMAILED ME BACK!!!!!

Can I just say I’m shocked. Shocked. Mainly due to the fact that I scared the b’jesus out of her when she visited Stumptown last summer. (I was soooo excited. Those who know me know I get a wee bit “slightly-inbred-cocker-spaniel-on uppers” when excited. I think I may have invited her and a cast of thousands out for drinks that evening. If you combine that fact with a very shy person’s temperament, well it just ain’t good.) I’m also shocked because I was in a fugue state when I er, the Beast wrote the note. The Beast… the beast who “outs” me more often than not was looming large that day when I met her and was my moniker in the note. (I’m sure it was actually the Beast who wrote the note.) Finally, I fearfully report the words “feminine hygiene products” may have been used in the email. (We are unclear on that point. We may be drinking to stay in that realm of unclarity.)

All in all it was a very cool day.

The post The Coolness and the Love! appeared first on Knit Purl Blog.