My high hopes (unreasonable expectations) each holiday season leave me worn and tattered striving to ensure everything I do is “enough”. My roommate and I hung our Holiday greenery pictured here: 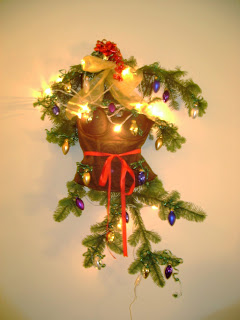 It fit in well with our living room decorating aesthetic. We are going for “Female Elks Lodge” and the bustier, like the trophy heads of innocent woodland creatures, hangs in our living room above our “fireplace”, which some may mistake for “wall heater”. I’m particularly fond of the recycled Mardi Gras decorations hanging scandalously from the décolletage.

I survived some Chariots of Fire-esque marathon knitting this year, but quite a few gifts were sporting needles on Christmas morning. With a few noted exceptions, like the scarf for the brother who blocks out the sun, I knit hats. Then I re-knit hats. Then I had a sleep deprived flashback to prior holiday experiences of knitting hats that were still too small for my large-headed kin and I re-knit them a third time. Take for example, my version of the Sideways Ribbed Cap: 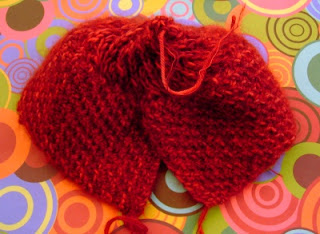 This photo, taken right before its final frogging shows a crown too shallow to fit my sister’s head. I highly recommend the pattern. It’s simple, charming with a refreshing construction and unlike my inspired version no frogs involved. I will knit the original pattern again as soon as my copy materializes…
Last night’s Sip and Stitch was refreshing as well. There were many comrades in the same predicament: modifications to gifts as well as finishing touches. A few fresh yet frustrating new projects as well: 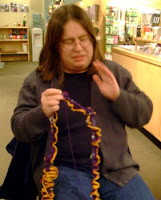 Don’t you just feel her pain?
I know I felt it. My little perdition knit was the scarf for my beloved brother the freak (I only feel love and adoration for him I assure you) who requested a black fingering weight scarf. I instead chose to knit a worsted weight camel and cashmere keyhole scarf. Knit lengthwise, I was…uh… er am, in the process of connecting one side to itself leaving a handy loop at one end that allows the other end to tuck through. Clever and manly which is important for the man about town.
It was a very bitter knitter who discovered that she pulled the ultimate rookie move. She didn’t check the scarf before she started sewing it, nor as she sewed it. No dear reader, she only realized the scarf was twisted when she ran short of cashmere yarn. About five yards short.

Bitter Bitter Now for my happy place. While I get in touch with my inner knitter, I encourage the faint and nauseous to explore a fiber happy place. Stay tuned dear reader, reporting from the remote yarn farms of Aichi prefecture, Japan our own earnest junior reporter, Fyberduck with an in-depth review on the current Noro sock situation.