We’ve had several concerned emails and questions upstairs.  The simple truth is that I’ve been out sick with the weirdest virus I’ve ever had and Lindsay has been overrun trying to keep up.   Sorry, guys.  Sandy Kay and I are working on our next tutorial: Duplicate Stitch; but she’s been busy catching up this week, as she was out of town for a week and half.  We’ll get there, honest!

In the meantime, we have some fantastic customer and staff projects to share.  First, we have Kristen’s absolutely beautiful Girasole shawl, which we caught her wearing: Knit with Mirasol Nuna in “Metallic Gold”. Alas, she has not added it to her ravelry notebook (yet), but maybe she will soon…

Then we have Eric’s astounding Mosaic tie: Knit with the laceweight bamboo XS-45, from Habu Textiles. On size 000/ 1.5mm needles! He made up the pattern and is just going for it.  There’s no way you can not be impressed by this.  It, quite honestly, looks (and feels) like something you’d buy in a high-end boutique.  The man is brilliant (and a little crazy).  We’re trying to convince him to sell the pattern to Twist Collective or Knitty.  Keep your fingers crossed.

Also impressive, Eva has been knitting up a storm lately!  She started a Side Slip Cloche (from Boutique Knits), using Madelinetosh Vintage in “Maize”, on May 26th… And finished it on June 4th (while working on, like, 5 other projects): 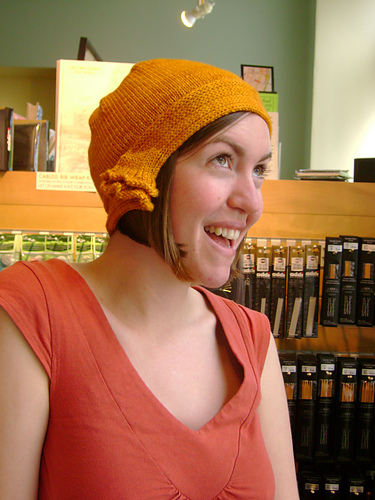 Not to mention the super cute little girls’ shrugs she finished last month: Aaaawwww, so sweet! The little one was knit with two colors of  Malabrigo Sock held together, using the Knitting Pure & Simple pattern “Little Girl’s Shrug” (coming to the website soon!). The larger was knit with Cascade Sierra, following the pattern “Children’s Neck-Down Bolero”. You can get more information about the sizing, colors used, and her notes on her ravelry notebook. And, you can also check out the very cool Aran Necklace camisole she’s making (from Interweave Knits), using Habu Textiles Tsumugi Silk and Louet Euroflax Sport held together (yummm).

Now, in my defense, I have been knitting. I’ve just had to rip some of it out, like this: And then, of course, there’s the enormous Liesl I’m trucking away on (dress, anyone?), and can’t bear to haul in anymore. I’ll wear it in when it’s done, honest. Lindsay and I, your faithful (if sometimes tardy) bloggers have been knitting… just nothing we can blog about yet (unless you really do want to see 140 cast on stitches and not much else…).

In lieu of other staff projects, how about a cute baby bird photo? The fledgling sparrow we rescued a couple of weeks ago.  He (or she – it’s so hard to tell with babies) got lost in the Big Storm and was freezing to death on our doorstep (literally).  Well, we got him dried off, warmed up, and fed and let him go that afternoon (during a dry intermission) and watched him fly off (a little wobbily).  Well, ‘lo and behold, another fledgling sparrow (the same one?) visited the store last week: He (or she) had no trouble flying in through the door, but couldn’t quite figure out how to fly out. So, after an hour of trying to coach him (her?) out the door, we finally caught the poor thing and released it outside. We can’t help but wonder if it’s the same bird – now affectionately referred to as “Birdie”.  After all, it was waiting on the doorstep and flew in as soon as I opened the door, silly thing.

Maybe s/he wanted more crackers.  What do you think – same bird or not?

Check back later this week (Wednesday, maybe) for another post (we have a lot of customer and staff projects to catch up on!) and another edition of Fashionknitsta.  Hopefully, I’ll be able to corner Sandy Kay before TNNA for that tutorial, too.  ‘Til then, happy knitting!